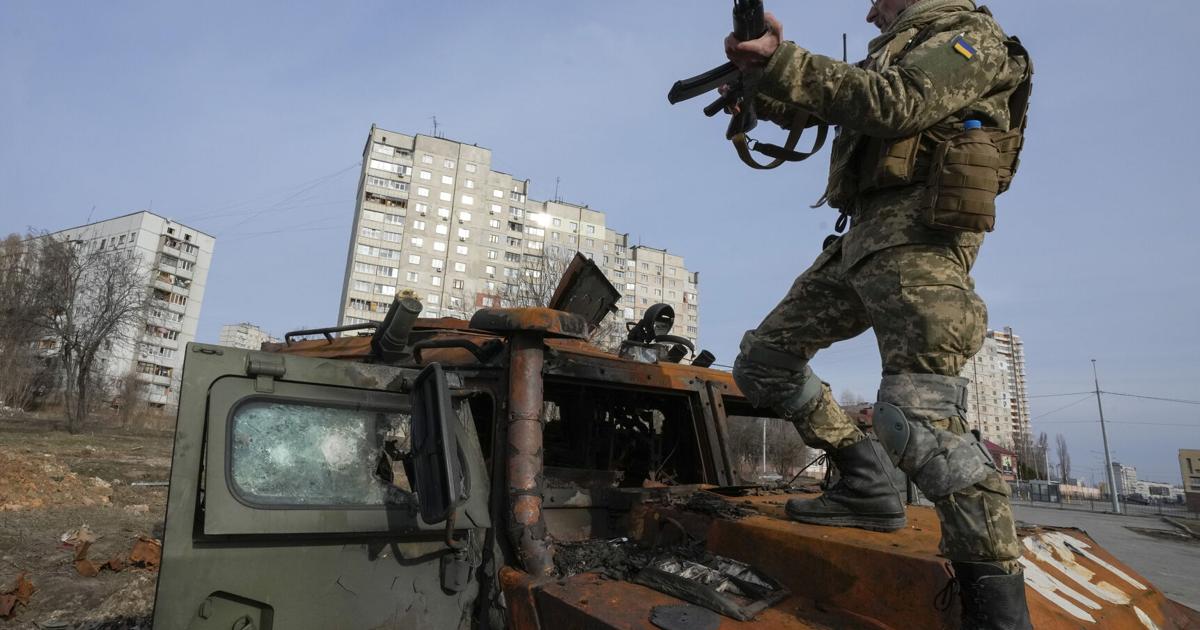 (CNN) — Just over a month after the first ballistic missiles slammed into Kyiv’s international airport, the Russian campaign has been disrupted and derailed by stubborn Ukrainian resistance — and in the last few days by agile Ukrainian counterattacks on several fronts.

Russian forces retain considerable — but not overwhelming — numerical superiority. Their armored groups have struggled against Western-supplied anti-tank weapons and Turkish-made drones. Ukrainian air defenses have punched above their weight and are now being reinforced by thousands of US-made Stinger missiles.

Poor logistical support, questionable tactics and growing evidence of poor morale among Russian battalion tactical groups have allowed the Ukrainian military to hold off Russian advances in several regions — and begin to take the fight to the enemy.

CNN analysis of satellite imagery, social media content and official statements from both sides suggests the conflict may now be moving into a new phase: a war of attrition in which the Russians may lose more ground than they gain and suffer even greater resupply issues as the Ukrainians cut into their extended lines.

There are indications that the Russian military is trying to compensate for this by greater use of missile forces and indirect fire from artillery and multiple launch rocket systems. To the north and west of Kyiv, for example, the Russians appear to be digging in rather than seeking to advance, shelling areas like Irpin and Makariv, where Ukrainian troops have established a tenuous hold.

In the last two weeks, there’s been an uptick in Russian missile strikes, from Lviv in the west to Zhytomyr in central Ukraine and Mykolaiv in the south, with prime targets being fuel dumps, military depots and airfields.

Ukraine goes on the attack

These fightbacks are limited and focused but include fronts in the south, central Ukraine and the northeast.

The Institute for the Study of War, in its latest assessment, describes them as “prudent and effective, allowing Ukrainian forces to regain small areas of tactically or operationally significant terrain without overextending themselves.”

The push towards the Russian-occupied city of Kherson is perhaps the most ambitious. After resisting attempts by Russian forces to take Mykolaiv — a bridgehead for assaulting Odesa — the Ukrainians launched devastating missile attacks against the Russian command at Kherson’s airport (killing a Russian general in the process, they say) and gained ground to the north of the city. This as civil disobedience in the city has frayed the nerves of Russian troops.

On Sunday, a large crowd took to the streets of Kakhovka — east of Kherson — to protest Russian occupation. A local journalist, Oleh Baturin, told CNN that Russian forces still controlled the area. Kakhovka matters because it’s close to a bridge linking Kherson with points east. A Russian land corridor linking Crimea with its border would be hard to sustain without that access.

Baturin said there was heavy fighting near the nearby town of Tavriysk and Nova Kakhovka, where there was a large concentration of Russian forces.

How this battle evolves could have a major bearing on the Russian campaign in the south.

Ukrainian forces now appear to have retaken some outlying areas. Oleh Syniehubov, the head of the Kharkiv regional administration, claimed Saturday that “several settlements were liberated” east of the city.

A long video analyzed by CNN showed an assault by troops of the ultra-nationalist Azov Battalion on a village near Kharkiv in which they took a number of Russian prisoners, some of them apparently badly wounded. Other videos showed a string of villages south of Kharkiv now in Ukrainian hands.

Russian forces continue a weeks-long attempt to take Izium, to the south of Kharkiv, but Ukrainian resistance continues in the heavily damaged city.

Still in the northeast, CNN has geo-located video and images showing Ukrainian forces back in control of the town of Trostyanets, some 30 miles from the city of Sumy, with Russian armor including a T-80 tank and infantry fighting vehicles damaged and abandoned.

The Ukrainian 93rd Brigade posted images on its Facebook account showing its soldiers in Trostyanets, and said the Russians had fled — “leaving behind weapons, equipment and ammunition.”

ROSTOV, RUSSIA – FEBRUARY 23: A convoy of Russian military vehicles is seen as the vehicles move towards border in Donbas region of eastern Ukraine on February 23, 2022 in Russian border city Rostov. (Photo by Stringer/Anadolu Agency via Getty Images)

Just east of Kyiv the last few days have seen Ukrainian gains in a largely rural area some 40 miles (70 kms) from the capital, around the villages of Lukyanivka and Rudnytske. If sustained, these gains could complicate an already long Russian supply chain and even cut off forward Russian units.

It’s not all one-way traffic. The city of Chernihiv north of Kyiv is still surrounded by Russian forces, which have also entered the nearby city of Slavutych this weekend. Social media videos showed them in control of the center of the city, using stun grenades and bursts of automatic fire into the air as a crowd of several hundred Ukrainian civilians protested.

And the Russians retain the ability to shell the outskirts of Kyiv from the north.

As their ground campaign falters, Russian officials have asserted that encircling Ukrainian cities actually serves an ulterior goal: to pin down Ukrainian forces and prevent them from focusing on the separatist regions of Donbas.

Colonel General Sergei Rudskoy, first deputy chief of Russia’s General Staff, said Friday that laying siege to Ukrainian cities and damaging military infrastructure “allow us not only to tie down their forces and prevent them from strengthening their grouping in the Donbas.”

In announcing the special military operation on February 24, President Vladimir Putin said it was aimed at securing Donbas — the eastern regions of Donetsk and Luhansk — from an alleged Ukrainian assault.

Rudskoy appeared to reference that, saying, “In general, the main tasks of the first stage of the operation have been completed.” The Russian intention was never to storm Ukrainian cities, he insisted, adding that while the possibility was not excluded “our forces and means will be concentrated on the main thing — the complete liberation of Donbas.”

But Rudskoy also referred to a more ambitious goal of Putin, the so-called “demilitarization and denazification” of Ukraine.

The available evidence suggests Russian forces are edging forward on the fringes of Donbas. But a significant component of those forces has been itself tied down in the grueling siege of Mariupol. Losses there will affect their ability to project force elsewhere in the southeast.

The Institute for the Study of War said Rudskoy’s comments “could indicate that Russia has scaled back its aims and would now be satisfied with controlling the entirety of Donetsk and Luhansk Oblasts, but that reading is likely inaccurate.”

The ISW says: “The absence of significant Russian offensive operations throughout most of Ukraine likely reflects the inability of the Russian military to generate sufficient combat power to attack rather than any decision in Moscow to change Russia’s war aims or concentrate on the east.”

The Ukrainian armed forces command appears unconvinced too, saying that Russian units are reorganizing and consolidating to replace combat losses.

All of which suggests a second and possibly still bloodier phase of the conflict is about to begin, as Russia tries to reinvigorate a faltering campaign on the ground while doubling down on its use of cruise and ballistic missiles.