New Waymo Via partnership gives it access to 200,000 shippers and carriers – TechCrunch 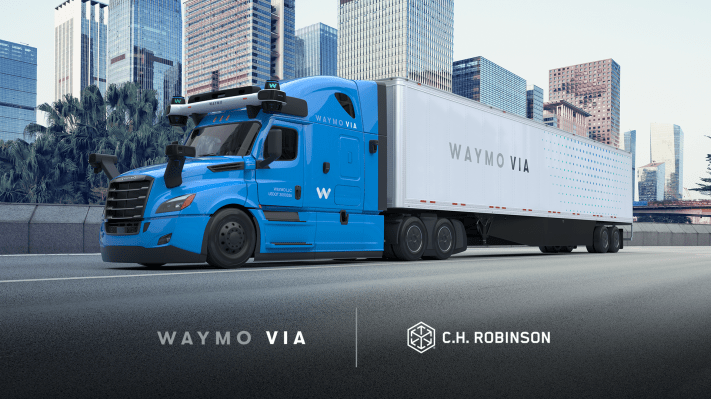 Waymo Via, Waymo’s autonomous trucking and cargo unit, has found another long-term strategic partner to see it through to commercialization.

The company is gearing up to launch a pilot with C.H. Robinson, a freight logistics technology supplier that connects shippers to carriers, within the coming months that will see Waymo’s test fleet delivering freight in Texas for one of C.H. Robinson’s customers.

The pilot is part of a larger partnership between the two companies that aims to combine Waymo’s AV technology, which is available to any carrier, with C.H. Robinson’s logistics data on over 3 million trucking lanes and access to a network of nearly 200,000 shippers and carriers, many of which are medium and small carriers that Waymo is interested in reaching.

“This partnership has the potential to influence how and where AV develops across North America and how it supports carriers,” a Waymo spokesperson told TechCrunch. “Waymo Via will deliver an autonomous solution that optimizes safety and efficiency. C.H. Robinson brings the logistics expertise and data at scale to help evolve the technology for the logistics industry’s specific needs and apply it where it has the most benefit for shippers and carriers.”

Last month, Waymo Via said shipping carrier J.B. Hunt would be its first launch customer for fully autonomous freight routes, which Waymo expects to reach within the next few years. At the end of last year, the company finished an extended pilot delivering freight for UPS via its test fleet of Peterbilt Class 8 trucks.

This most recent partnership, announced on Wednesday, will involve multiple pilots with C.H. Robinson’s customers over the next few years. Neither Waymo nor C.H. Robinson would share specifics about the initial pilot, such as how many vehicles would be involved, when the pilot would start or how long it would be. They did say, however, that the pilots would take place along the Dallas to Houston transportation lane.

The partnership with C.H. Robinson gives Waymo a chance to flex its Driver-as-a-Service business model, which involves partnering with OEMs like Daimler Truck to build trucks that will be designed for and equipped with Waymo Driver, the company’s AV system. The goal is to have carriers and fleets then purchase these trucks, which would be outfitted with all the hardware needed to make a self-driving truck do its thing, and Waymo Via will provide ongoing support and services for hardware and software.

In short — Waymo isn’t trying to build, own and operate fleets. It wants to “provide a truck with the Waymo Driver as an option to the industry,” said Charlie Jatt, head of commercialization for trucking at Waymo Via, during a press briefing on Tuesday. “And then it’s really made available to carriers and logistics experts like C.H. Robinson to leverage that technology and improve their businesses and operate those assets in order to serve shipping customers.”

While Waymo has experience bringing fully autonomous vehicles to a commercially viable scale via its robotaxi service in Phoenix, it still has a lot to learn about where it can best apply its Waymo Driver to freight. That’s what makes the partnership with C.H. Robinson useful — the companies hypothesize that long-haul trucking is the area most in need of autonomous drivers, particularly because it’s hard to find human drivers to fill that capacity, and C.H. Robinson’s data will help to confirm that.

On C.H. Robinson’s side, the partnership is about more than just implementing AV tech for tech’s sake. The company’s main concern is helping carriers find efficiencies in their business, which will translate to more efficiencies for C.H. Robinson’s shipping customers that have been struggling from the effects of the driver shortage.

“Ultimately, autonomous technology and the mode itself needs to pay for itself with efficiency and greater utilization and rates in general,” said Chris O’Brien, C.H. Robinson’s chief commercial officer, at the briefing. “A typical conversation [with our carriers] at the end of the year would be, ‘Okay, C.H. Robinson, what do you have from a capacity standpoint for next year?’ And based on those commitments they go make hiring decisions and lease or purchase decisions for tractors and trailers. So we see this as just one more way that we can bring an option to them that is different and has all the advantages of efficiency and labor savings that they can bring to the table, as well as freeing up their drivers to handle the short-haul freight.”