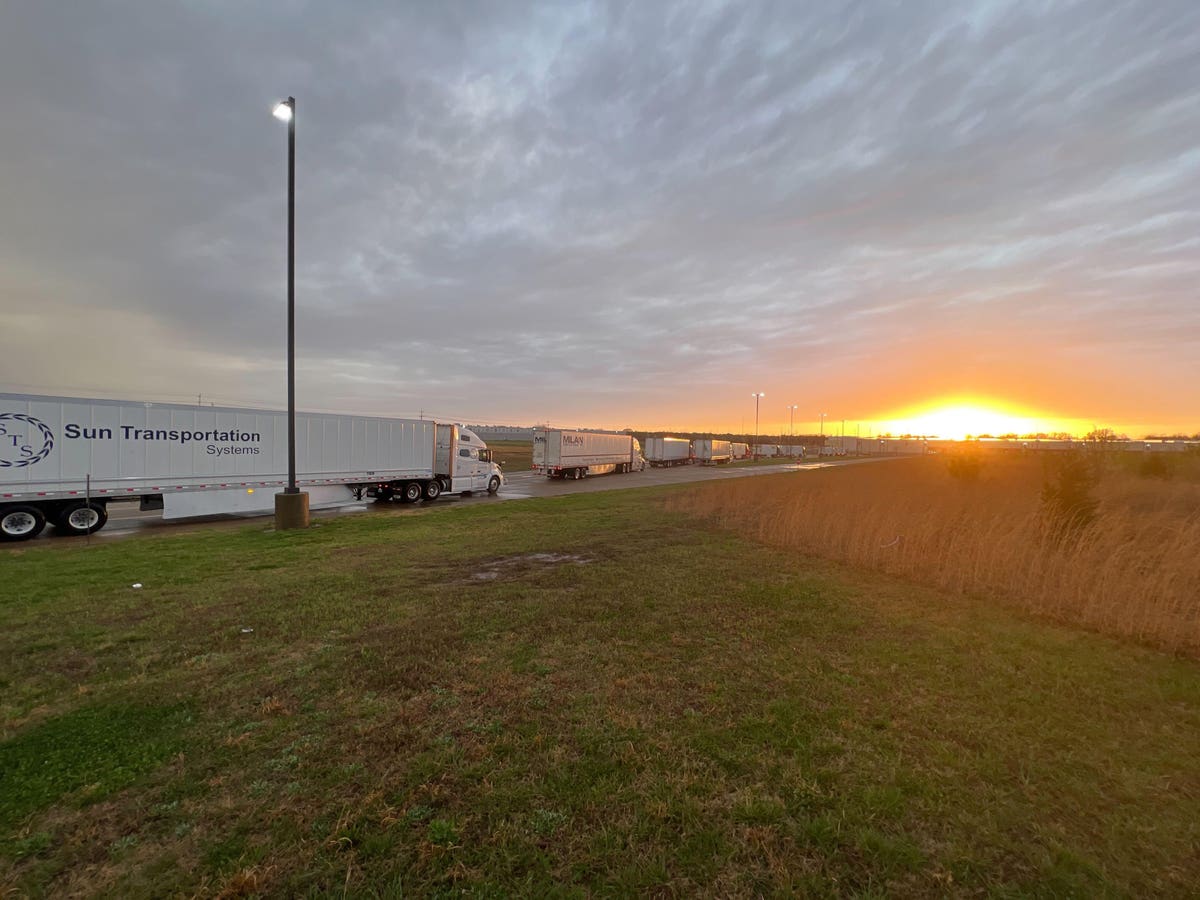 Line of long-haul carriers on the road at sunset at a Ryder facility in Jackson, Tenn.

A truckin’ social media maven, a carrier whose devotion to his faith is in his company’s name and a long-married couple who share life in the cab. That’s who Grant Goodale, co-founder and Carrier Experience Officer of trucking logistics tech company Convoy rode with for the last 1,200 miles or so of his journey from company’s base in Seattle, Wash. to the Mid-America Trucking Show this week in Louisville, Ky.

He was looking for the kind of insight, wisdom and straight talk about the concerns of today’s truckers best gathered barreling along with them on the road, on the job.

“I observed how they work, what the challenges are. I got to observe their love of the road and their love of the profession and their skill,” Goodale told Forbes.com after arriving in Louisville. “It was an incredibly humbling and rewarding experience. It was amazing to get to see these professionals that we rely on for our everyday lives day in and out at work.”

Goodale touched down in San Antonio, Texas to catch his first ride with Thomas Singletary. He runs a small trucking company with five trucks, five drivers and eight trailers he named Tithing Transport LLC out of Converse, just east of San Antonio, with his wife Pauline and niece Natasha. Goodale described him as “a devout man.”

“He basically worked his way out of homelessness by starting this carrier and is thriving today,” Goodale explained. “It was really heartwarming to see how much success they’ve been able to create for themselves.”

Goodale hopped a ride with Singletary to a distribution center to pick up a trailer they hauled around 300 miles to Plano north of Dallas. Along the way Goodale took in Singletary’s story of how he built his business, dreams for the charitable foundation his wife started and some hard truth—especially about rising fuel prices.

“You can imagine, for a small business how much impact that has,” Goodale said. “It’s the small carriers that are going to feel the squeeze because they’re the ones that don’t have large bank accounts and tons of operating capital.”

That wasn’t Singletary’s only concern.

“He got into business fairly early in life and really fell in love with the camaraderie and the feeling that truckers are sort of a brotherhood and I think he worried that part of the reason people feel like there’s a driver shortage is that some of that feeling is gone,” Goodale related. “His advice to young carriers is to get out and see the world and get the feel for what it’s like to be a long haul trucker before you get too committed to staying in one area building a business.”

Convoy co-founder and CXO Grant Goodale in the cab of a truck driven by Jacinda Duran from Dallas, … [+] Texas to Tennessee.

After parting ways Goodale’s next ride was a totally different experience with Jacinda Duran, better known on her widely followed social media accounts as Jacinda Lady Truck’n. They spent a long day and night to reach Tennessee.

Part of the trip consisted of what truckers call “bobtailing.” Goodale explained that’s driving empty to get to the next loaded trailer and referenced data gathered by Convoy and the industry that estimates 35% of miles driven by heavy trucks are driven empty.

Truckers want to be on the road carrying revenue-paying loads but they often waste hours for their trailers to be loaded or unloaded. The industry is more often adopting a practice called “drop and hook” where the driver drops a full trailer and picks up one that’s pre-loaded, hopefully, saving lots of time.

It doesn’t always work out that way.

“That’s exactly what I did with Jacinda and it still took us three hours to get the trailer and get out because their was a huge line at the gate,” Goodale recalled. “Then she had a mechanical problem with her truck, a simple fix. This is not nightmare. This is normal. It’s what they deal with. It’s trucking. It’s what it is.”

Convoy co-founder and CXO Grant Goodale (left) with married truckers Mike and Dawn Ellis who gave … [+] him his third and final ride on his road trip to the Mid-America Trucking Show in Louisville, Ky.

Goodale’s last 250 mile leg to Louisville was spent in the company, and cab, with Mike and Dawn Ellis. Based in Pearl River, La., and driving for Greenmiles, the couple’s been married 21 years, spending much of it on the road hauling freight for months at a time.

They jokingly call living, working and driving in close quarter “a test” for their marriage, Goodale said.

What is a real test for them, the Ellis’s told Goodale, are the inefficiencies in the business that are leading to lost time, lost money and misconceptions about a shortage of drivers.

“I learned they don’t believe there’s a driver shortage. It’s an efficiency problem. They think instead the problem is large carriers are having a hard time finding drivers to fill the new trucks they over-bought in anticipation of there being a huge spike in the amount of freight moved,” Goodale said.

In light of those inefficiencies, Goodale said Mike Ellis told him “I could be moving more freight for all of these shippers if I could predictably and reliably get into and out of facilities and plan my schedule more reliably and drive more loaded miles.”

By the time Goodale rolled into Louisville with the Ellises he found himself with a full load of insight and lessons learned about the industry his company serves.

Aside from the specific issues the drivers related to Goodale, his eyes were opened by what he saw through the windshield from his high perch.

“When you sit up above everybody in one of these trucks and you see how cars and other, they call them four-wheelers, move around them and how little respect they have for the physics of an 80,000 pound truck that takes two football fields to stop. It opened my eyes to how challenging and environment these drivers are operating in everyday to move the goods we rely on,” Goodale observed.

His three days on the road weren’t a mere adventure. Goodale said he plans to make everything he learned “consumable” for Convoy’s employees.

“I hope the experiences I’ve reported and shared with people in my company open their eyes to the magnitude of the challenges our carriers face and better inform the products and services we build for them,” he said. “There’s so much value in just hearing it from carriers themselves, understanding that the challenges they face in their own words is invaluable.”